Back in December, I had big plans for what I was going to read this year. Except… I’ve gotten sidetracked reading lots of other things. As a librarian, I am a firm believer in the principle of “the right book for the right reader at the right time,” and so I am choosing to believe that I will get back to reading all those books on my shelves when the time is right. In the meantime, here are a few books that I’ve especially enjoyed lately: 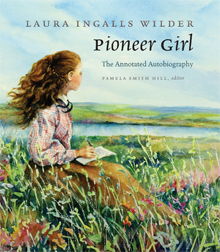 I spent a good part of January reading Laura Ingalls Wilder’s autobiography Pioneer Girl, which has been annotated by editor Pamela Smith Hill. Wilder wrote this autobiography first, and when she and her daughter could not find a publisher for it, it beme the source material for the entire Little House series. For me, the annotations made the book. They provide a wealth of historil context as well as insight into Wilder’s writing process (not to mention some literary theft by Wilder’s daughter Rose Wilder Lane). It was fascinating to compare this original recounting of her life with the narrative of the fictional Ingalls family that was eventually published, complete with explanations about how Wilder and Lane shaped the story to better fit the mythology of the Amerin pioneer family.

Ostlere explores the nature of grief and loss as she recounts the year following her brother David’s disappearance while sailing with his girlfriend Sarah between Ireland and Madeira. I completely agree with the assessment of the friend who recommended it to me: well-crafted and heartbreaking. I also highly recommend Ostlere’s verse novel for young adults, Karma.

We Were Liars by E. Lockhart. Penguin Random House/Delacorte, 2014

In this “modern, sophistited suspense novel” (to quote the book jacket), dence Sinclair Eastman is desperate to remember what happened the summer she was fifteen, when she suffered a head injury during a mysterious accident on Beechwood Island, where her family spends the summers. I wasn’t sure about the ending at first – which one person in my book club astutely described as a Holy F*** ending – but the fact that I’m still thinking about this books weeks later is a sign that it works. Lockhart’s The Disreputable History of Frankie Landau Banks is also well worth a read.

This gorgeous, spare book of poetry was like a balm for a bruised soul. (I didn’t even know I had a bruised soul.) It was one of those books I devoured and then was sorry it was finished. Since I n’t quite bear to put this book away on the shelf, I suspect it will sit on my bedside table – so I n dip into it now and again – for quite some time.

“Our lives are at once ordinary and mythil.”
~ Natalie Goldberg in Writing Down the Bones

My grandmother’s life was ordinary: she immigrated to nada as an infant with her parents and older brother, she went to a country school. She worked as a housekeeper and cook; she married, farmed with my grandfather, had two children.

Her stories filled my childhood and beme part of the mythology I rry with me everywhere. I may have missed many of the Greek and Roman classil stories growing up, but I know about the first time my grandmother, Olga, baked bread on her own: it was the day her youngest brother was born. He was born on her last day of grade eight, her last day of school ever. Olga’s basketball team was playing a game but she couldn’t go to school beuse her mother was having a baby, and Olga had to stay home to bake the bread. (She never let my great-uncle Art – the baby born that day – forget it, either, and teased him about it the last time she saw him, when she was in the hospital. I know beuse I was there.)

I know all about the adventures she and her siblings had growing up along the train tracks, and all the trouble they got into on the family’s farm. I know how the men on the threshing crew at the farm where she worked when she was a young adult loved her baking, especially her pies, and told her she should open a bakery.

Of course, there is a darker side to this mythology too, one she didn’t talk about. Now, as an adult, I am slowly uncovering more pieces to the puzzle and filling in the gaps of some of those stories.

Last month I wrote about finding inspiration in history – and what better place to find it than in my own history?

While that is a rhetoril question, I’ve been thinking about the connections between the ordinary and the mythil lately, as my current project – although fiction – touches on my family’s history. I find myself asking other, real questions. Questions I don’t have answers for yet: what do I do with all of these stories? What is my obligation, my responsibility? And: if I am telling these stories, how do I do so in a respectful way – but a way that is also honest and doesn’t shy away from the darker parts of my personal mythology?

The Nursing Edition, or, What Kittens Have to do with Delivering a Baby

I am working on a new writing project, set in Alberta during the 1920’s and 1930’s. I spent much of the fall immersed in research. Delving into Alberta’s history has been really fun (yes, I am a librarian), and I find myself with more interesting information than I will ever be able to use. Instead of saving it all for cocktail parties, I’ve decided share some of it here from time to time. 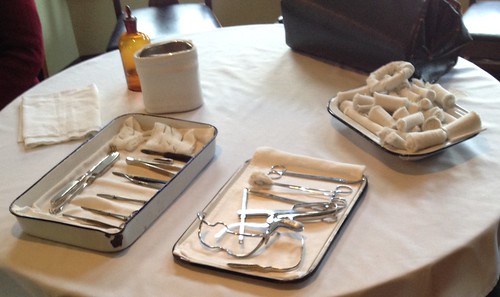 Today’s tidbits come from the Heritage of Service: The History of Nursing in Alberta, by Tony shman (Alberta Association of Registered Nurses), which I was reading beuse one of my characters is a nurse.

Heritage of Service made for a fascinating read beuse of all of the anecdotes it included. Take this story, for instance, about Dr. Archer and his wife Jessie Archer, who was also his assisting nurse during this surgery in Lamont in the early 1900’s:

She gave the anaesthetic for the man who had the abscess at the base of his skull, and she had a large audience beuse the man and his many relatives agreed to the operation only on condition that all the relatives could come and watch. Patient and family were not in favor of the surgery beuse they thought the doctor was going to operate on the man’s brains. There was intense silence as Dr. Archer opened the abscess and began to remove the infected matter. Then the Archers nearly lost their professional composure as a large lady relative sighed: “Poor fellow. He never had much brains to begin with” (74). 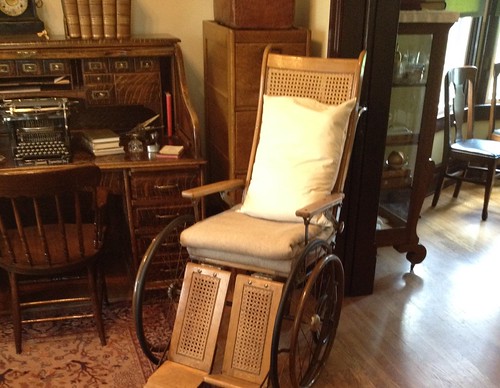 Imagine working in – or receiving medil attention in – a facility that, in rural Alberta in 1928, “could be considered ‘modern’ without running water” (146). A few more details about conditions in Alberta’s early hospitals:

There was a tiny kitchen. If an operation me up, we would have to move the patients out of the front room, then clean it up to the best of our ability before operating. We had an antique sterilizer which we used, sort of a double-boiler affair the size of a large pail. This we set on the stove to sterilize our dressings. It was some job and we had no assurance they were sterile. We had to finish them off by drying them in the oven. This was a great worry to me; a far cry from our electric sterilizer in Medicine Hat. The X-ray room was my broom closet. I took most of the X-rays. ….The babies were kept in baskets in the kitchen by the stove and were bathed on the kitchen table (Mary Cody, describing the Cereal Hospital, page 132).

The Great Depression didn’t make it any easier:

One of these self-trained nursing aides was once out assisting in a maternity se in a bin where the mother had used all the available flour sacks to prepare one layette. That would have been all right if there’d been only one baby, but a second arrived unexpectedly and this baby really me naked into the world beuse his twin brother had all the clothes. So the helpful lady asked Dr. Chisholm to turn around for a minute, a minute in which she took off her slip and made the newcomer presentable (223). 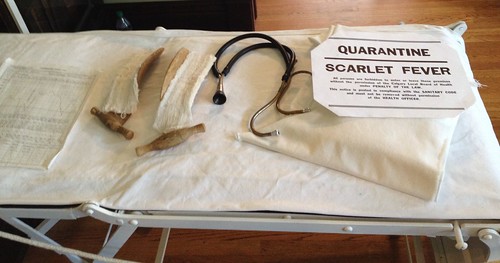 However, this final story is my favourite:

Miss Willis wrote: “No course n equip us with ready made rules for all contingencies. What to do, for example, when at the moment of delivery you turn to your table for an instrument and find a kitten of whose existence you were previously unaware, intimately inspecting your sterilizing gear” (242).

What to do, indeed.

The photos in this post were take at the Cottage Hospital in Heritage Park, lgary, Alberta.

I read Heritage of Service in the Heritage Room at the Stanley A. Milner Branch of Edmonton Public Library. 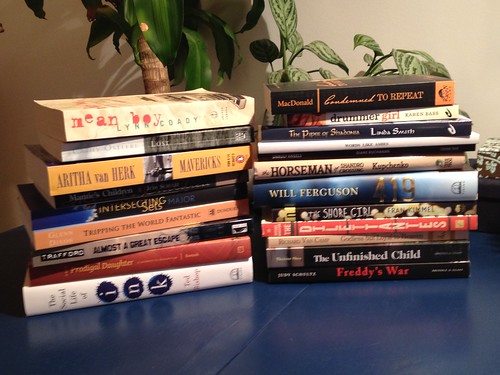 My friend Kristilyn is hosting the How nadian Are You? – The 2015 Ultimate nadian Reading Challenge over on her blog Reading in Winter.

I am going to participate in the “Lol Lover nadian Challenge” and read 20 books by Alberta authors this coming year – in large part beuse I discovered that I already own more than 20 books by Alberta writers that I haven’t read yet (as evidenced by the photo above).

Thinking about Kristilyn’s challenge made me look at my shelves and all of the books I have purchased over the years and not read. Part of it is an occupational hazard: when I worked at the library it was easy to bring books home with me, and I always ended up reading the library books first beuse they were “due” and other people were waiting to read them. I told myself that I could read the books I own anytime.

But that didn’t stop me from buying books (possibly another occupational hazard) and now I own an entire bookse of books I haven’t read yet. There is a Japanese word for this particular vice: Tsundoku.

I’ve decided to create my own reading challenge for 2015, one designed to get me reading the books off my own shelf, to make a dent (if only a small one) in my own reading pile. Starting with the letters A and B in January, I am going to read books by authors whose names begin with each month’s designated letters (hint: February will be C and D).

I will post an update on both challenges here each month, to keep myself on track. Although I am doing this for myself, you are welcome to play along if you like in the comments.

Do you set reading goals/challenges for yourself? What are they?

The wonderful Saskatchewan poet Glen Sorestad (read a selection of his poems here) often marks solstice by sending out a poem on the darkest day of the year. In that tradition, I have decided to share a new poem – one that celebrates winter – here today. 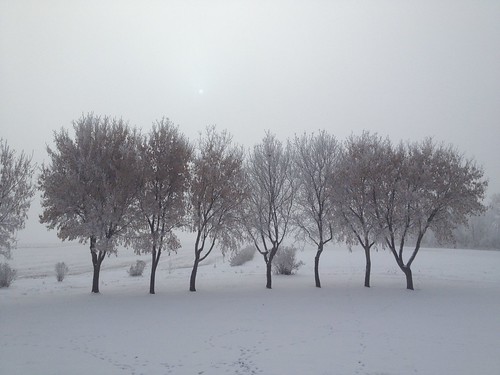 Hey – where did this poem go?

I was thrilled to find out that this poem will be included in the second volume of 40 Below. I’ve been asked to keep it under wraps until the book comes out. Look for this poem to reappear after the book is launched later in 2016!